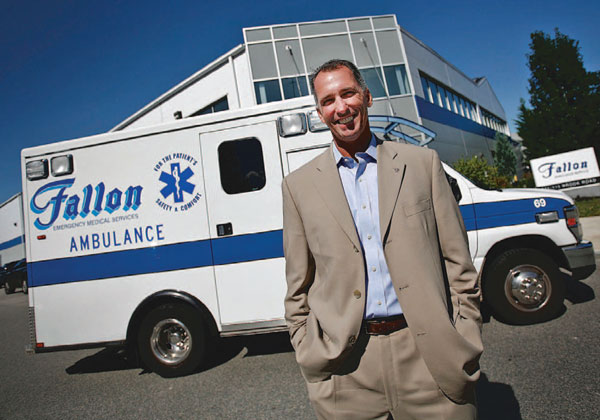 Fallon Ambulance’s Peter Racicot has two big things on his mind. The first is the Pan-Mass Challenge, the Jimmy Fund- vsupporting bicycle ride that Racicot rides in every year and that Fallon Ambulance has supported for 20 years. The other is the impending launch of health insurance exchanges next month (under the Patient Protection and Affordable Care Act) and other big changes coming to the industry, during the same year that Fallon is celebrating its 90th anniversary. The company was founded in 1923 by James Fallon Sr. and remains family-operated.

Fallon employs more than 650 people, including 125 paramedics and 375 EMTs, and operates 115 vehicles.

Racicot hopes to make Fallon, one of the handful of mom-and-pop ambulance companies left in the state, a more flexible enterprise in an era of uncertainty for the healthcare industry.

How did Fallon first get involved with the Pan-Mass Challenge?

(Fallon has) been involved with Pan-Mass since 1993. I got involved because, at the time, I was director of public relations here at Fallon, and we were working with Dana Farber (Cancer Institute). In 1993, they needed medical volunteers for the ride, and obviously Fallon has a lot of EMTs and paramedics. So my job became a recruiter, and I got about 10 EMTs for that first ride in 1993.

What towns does Fallon operate in?

We’re contracted on a 911 basis with Braintree, Brookline, Dedham, Milton, Quincy and Weymouth. And these are relationships that have been longstanding. There are a lot of companies in this busi- ness that have chosen to build success and then decided to sell to a national operator. We won’t do that. We've been the only consistently family-operated ambulance business in Massachusetts over the last 90 years. We’ve had offers. We’ve had opportunities to sell and move on. But we’ve chosen to stay our course.

Do you have any plans to mark Fallon’s 90th anniversary?

On Oct. 1, we’re going to have a celebration over at Steele & Rye in Milton. It’s now an upscale restaurant, but we spent a good 40 years of our operation in that building, from the late ’60s to 2005, when we moved to Quincy.

We have about 30 employees that have been with us for more than 20 years, and the celebration is really for them. It’s our way of saying, "Hey, it's not just the Fallon family that's made it possible, it's you."

We’re also going to do some re-branding of our vehicles. We created a new logo for our 90th that reflects our history, you’ll see that on our vehicles over the next two months. But overall, we’re keeping it somewhat simple.

What do you think drove that trend of selling out to larger companies?

It was just the model in the '90s, where we saw the roll-up of a lot of the mom-and- pops. There’s been a shift now. There are still plenty of family-owned companies; even Brewster (Ambulance) is back in business.

It’s interesting to see start-ups come in when there’s so much downward pressure on reimbursement. Medicare’s payments have decreased by 20, maybe even 25 per- cent, and I have to scratch my head at times.

There are a lot of ways, and cutting costs is an important one

Statistically, 20 percent of people who call 911 do so incorrectly. So we have to be creative, and ask, "How can we help the healthcare system deal with that 20 percent, and cut costs?"

If Mrs. Smith’s toe hurts because she’s a diabetic and she calls 911, we have to pick up Mrs. Smith and take her to the emergency room. But all she really needed to do was call her primary-care physician and schedule an appointment for Wednesday.

Wouldn’t that be counterproductive for an ambulance company?

Ironically, it sort of flies in the face of what we want to do, which is transport people. But if that’s all we’re focused on, we’re not going to be successful in the future. Be- cause now there’s an expectation that if you’re a nursing home provider or a hospital provider, you’re going to help reduce costs.

Article by Dan Schneider. Originally published in The Patriot Ledger. Dan Schneider may be reached at dschneider@ledger.com.