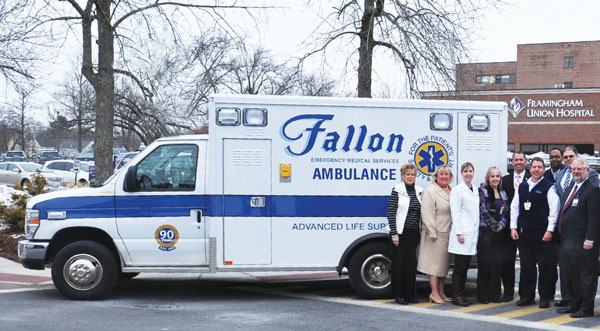 The 90-year old privately held family business has been selected as the EMS provider for the MetroWest Medical Center including its two hospitals: Framingham Union Hospital, at 115 Lincoln Street; and Leonard Memorial Hospital, 67 Union Street, Natick.

MetroWest Medical Center is the largest community healthcare system between Worcester and Boston, and this contract will represent approximately 6000 annual transports for Fallon Ambulance Service.

Peter Racicot, Senior Vice President at Fallon Ambulance, said that Fallon Ambulance had first participated in an RFP process (Request for Proposals) in 2009. While that RFP did not result in the contract award at that time, it ultimately led to Fallon’s being invited back for discussions this past summer. In September, Fallon Ambulance Service again participated in an RFP process, and the company was the unanimous choice this time. The MetroWest review committee consisted of executives, nurses, and doctors. The Hospital awarded Fallon an exclusive contract to serve the needs of both the Framingham and Natick locations for the next two years.

In preparation for this expanded workload, Fallon has added more than 30 professionals to its team and has opened another location, at 250 Eliot Street, Ashland. The Ashland location will serve as the central hub for Fallon’s Metro West expansion; the company will garage 6-8 vehicles at the Ashland location. Fallon Ambulance also maintains another Metro West location at 55 Rumford Avenue, Waltham.

He also said that Fallon will also aggressively pursue other opportunities in the Metropolitan West area.