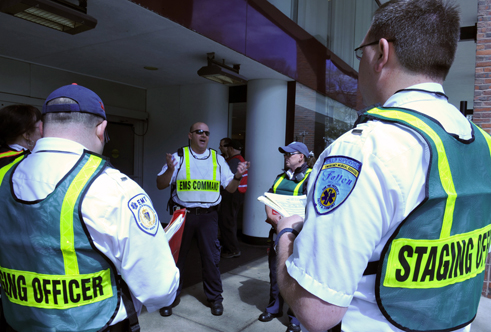 BROOKLINE and QUINCY, MA, ISSUED May 8, 2014…Fallon Ambulance Service (www.fallonambulance.com) played a key role in the recent Urban Shield exercises conducted in and around Boston, taking the command role in the evacuation and patient transfer drills for Mass General Hospital and participating in several area SWAT drills.

Anyone in the greater Boston area who had not seen the advance media notification about the drill might have been taken by surprise in witnessing some of the activity around Mass General Hospital, and also by what appeared to be a fully-engaged SWAT operation at Crown Colony in Quincy, as well as in Cambridge and Brookline.

One of the SWAT scenarios was on the MIT campus in Cambridge, simulating a disgruntled employee of a business bringing a gun to work and shooting 10 people.  ‎The SWAT teams were tasked with securing areas within the building and escorting Fallon’s tactical medics in to find, assess, treat, and extricate the victims.  Injuries ranged from minor to serious gunshot wounds, to fatalities (DOAs).

All of the exercises in and around Greater Boston were part of a 24-hour drill put on by the Metro Boston Homeland Security (MBHSR), whose activities are supported with funding from the Department of Homeland Security through the Urban Areas Security Initiative grant program. Boston has been designated as one of the “highest threat” urban areas within the United States.

The UASI program focuses on enhancing regional preparedness in major metropolitan areas, and directly supports the national priority of expanding regional collaboration in the National Preparedness Guidelines.  The UASI program assists communities in building capabilities to prevent, protect against, respond to, and recover from threats or acts of terrorism.

Urban Shield Boston is a continuous 24-hour exercise, during which first responders are deployed to and rotated through various training scenarios. This is the largest exercise ever conducted in Boston to date, involving over 600 emergency responders from 50 agencies.