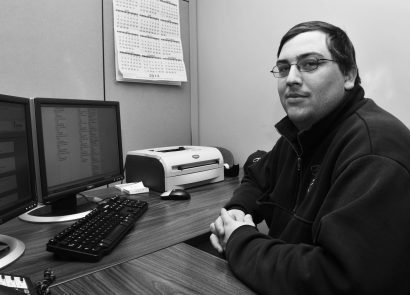 In this role, he will coordinate the assignment of Paramedics and EMTs to specific ambulances and shifts to assure that each vehicle is fully staffed each day of the week, and to coordinate the hours and work times of each shift.

Rowell has been with Fallon Ambulance Service since shortly after his graduation from Southeastern Regional Vocational Technical School. He joined Fallon as an EMT and has nearly a decade’s experience.  Rowell, who was recently married, resides with his wife Jessica in Whitman, MA. In his spare time he is one of the leaders of the Christian Youth Organization for the Grace Chapel in Brockton.

“I have always wanted to help people, so a career in this industry has been great for me,” he said.

Peter Racicot, Senior Vice President of Fallon Ambulance, said, “We are pleased to be able to promote Ed through the ranks here. Many of us began as EMTs; it is the best building block for truly understanding this industry and how patient care always comes first.”

Fallon Ambulance Service was founded in 1923 by James R. Fallon, Sr. Mr. Fallon’s son, James R. (Ray) Fallon, Jr., served as President and owner from 1974 until 2000. Today, Timothy J. Fallon, grandson to the founder, serves as President and CEO.  Tim’s sister Kathleen Mackie, step brothers, Peter Racicot, Senior Vice President and Normand Racicot, Vice President, also represent the third generation of this family business. And a fourth generation represented by 7 great grandchildren of the founder is working in various capacities in the organization. Fallon Ambulance is the largest privately owned and operated ambulance service in the Northeast. Fallon Ambulance employs more than 600 personnel, operates more than 150 vehicles and responds to over 160,000 emergency and non-emergency calls per year.  Fallon Ambulance is the 9-1-1 provider for the municipalities of Milton, Quincy, Brookline, Weymouth, Braintree and Dedham and provides primary backup to Boston and Randolph. Fallon Ambulance Service additionally provides medical transportation for a number of area medical facilities including nursing homes, hospitals, and HMOs throughout Greater Boston, the South Shore and Metro West region. It is headquartered at 111-115 Brook Road, Quincy, MA and operates satellite offices throughout its coverage area. Fallon Ambulance Service has been recognized many times by various business and community organizations for its exceptional service.  For additional information about Fallon Ambulance Services or programs that the company offers, contact Peter Racicot, Senior Vice President, at (617) 745-2117 or visit www.fallonambulance.com.