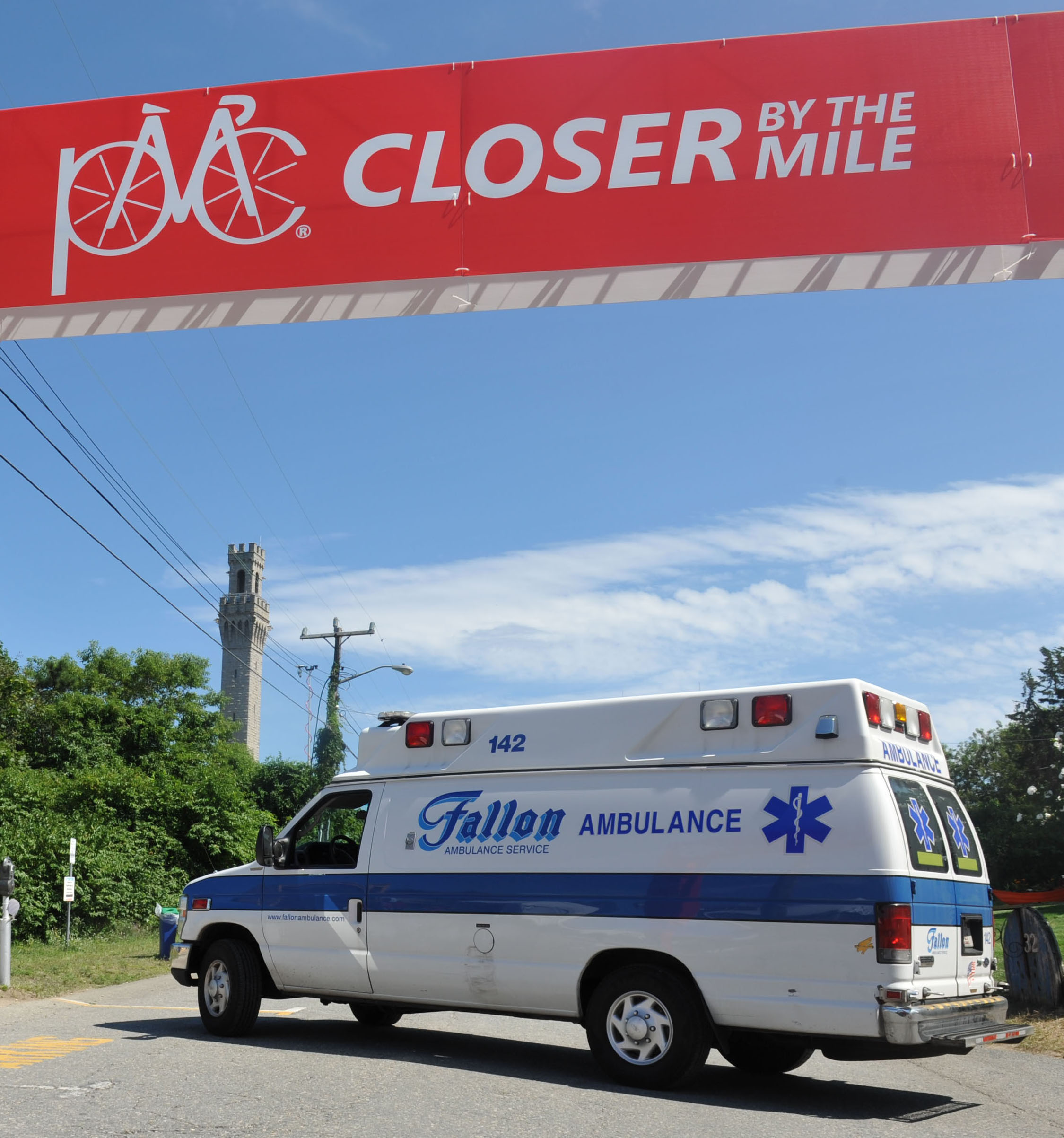 QUINCY, MA, ISSUED AUGUST  13, 2013…For Fallon Ambulance Service, 2013 marks a special milestone in its partnership with the Pan-Mass Challenge.

This is the 20th year that Fallon Ambulance has supported the Pan-Mass Challenge in several key ways: fielding riders to participate in the 190-mile, two-day bicycle ride from Sturbridge to Provincetown in support of cancer research, as well as volunteering its ambulances and medics to be stationed along the route in the event of medical emergencies.

This year, Fallon volunteered eight EMS vehicles along with paramedics, EMTs, and additional volunteers, and donated medical supplies for the event. Senior Vice President Peter Racicot estimates the company’s 2013 contribution to the event was $50,000, which he termed an excellent investment.

“Being in the business of emergency medical care, cancer research is a subject that is near and dear to our heart,” said Racicot, noting that in a company of their size, “so many people’s lives have been touched by cancer in one way or another.” He recalled that 1993 was the first year that the company participated in the event. Racicot himself has ridden in the PMC each year since then and has frequently been joined by other Fallon personnel on the route.

The company first recruited volunteers in 1993 when they learned that Pan-Mass Challenge was in need of additional assistance. At that time, Fallon Ambulance was still headquartered at its Eliot Street, Milton location. Racicot said that the company’s first volunteers included Ted Carroll and Jean Marie Bacon, and Kevin Dowd of Dorchester. “We have had so many people within our organization step up to help,” he said, noting that participation significantly increased when his father, Ray Fallon, who was President of Fallon Ambulance, was diagnosed with cancer.

“Ray was such a strong example to us all,” said Racicot, who rides in his father’s memory each year. Ray Fallon, who served as President of Fallon Ambulance Service for many years, succumbed to the disease in 2002. In addition to riding in memory of Mr. Fallon, the company’s volunteers this year worked to support one of their own – Weymouth resident Alicia Fabiano, an EMT with Fallon since 2007 who is battling cancer. “We rode to be ‘Alicia Strong’ this year,” Racicot noted.

Alicia Fabiano said, “The support from Fallon that I have received is just incredible. They have been there for me every step of the way.” She continues with chemotherapy treatments, will then have surgery, followed by additional chemotherapy and radiation. She added, “My Fallon family has been amazing; I couldn’t ask for better people to work with or to be on my side.”

“The overwhelming support we receive every year from family friends and strangers continues to inspire us as we come together in the fight against cancer,” said Racicot.  “It is rewarding to meet the cancer survivors and the people who ask us to ride in honor or memory of a loved one. I am proud of all of our Fallon team members who work behind the scenes and contribute their time and talents to this important event.”

Fallon Ambulance Service has become the sole ambulance provider for the popular event and always provides its ambulances and medics at no cost to PMC.

“For two decades, the PMC has relied on Fallon’s support,” says Billy Starr, PMC founder and executive director. “With more than 5,500 cyclists traversing 800,000 total miles on the PMC weekend, you need cover. Fallon gives us that and we are grateful.”

Funds raised in the Pan-Mass Challenge benefit Dana-Farber Institute and the Jimmy Fund.

Cycling and cancer research have been connected in New England since 1980 when 36 cyclists rode 220 miles across Massachusetts to raise funds for Dana-Farber Cancer Institute through its Jimmy Fund. Their efforts garnered more than $10,000 and the Pan-Mass Challenge (PMC), the nation’s original fundraising cycling event, was born. Today the PMC raises more money than any other athletic charity event in the country.

The Pan-Mass Challenge is a pioneer of the athletic fundraising industry and today raises more money for charity than any other single athletic fundraising event in the country. Held on Aug. 3 and 4, the 2013 goal was to raise $38 million for adult and pediatric patient care and cancer research at Dana-Farber Cancer Institute through the Jimmy Fund. The PMC, an annual bike-a-thon that spans up to 190 miles, is a model of fundraising efficiency, donating 100 percent of every rider-raised dollar to the cause. Since the PMC’s 1980 inception, the event has raised $375 million. Donations to the 34th annual PMC are welcome through October. For more information about the PMC, or to register to ride, visit pmc.org.